For Email Marketing you can trust
Welcome to Oliver Foundation > Oliver Story
October 1974
William B. Oliver dies of carcinoma of the colon. After his death, and continuing the legacy of his life, his wife Cluthe steadily made donations to charitable projects related to healthcare.

June 1995
With encouragement and direction from her nephew, Tom Woehler, M.D., Mrs. William B. (Cluthe) Oliver made an initial gift to establish the Cluthe & William B. Oliver Foundation for Health & Aging. Tom and Cluthe's vision was to establish a dedicated foundation to promote wellness and improve the general health of Texans.

December 27, 2002
Cluthe Oliver passes away. A significant portion of the Oliver estate is to be used to support the growth and activities of the Cluthe & William B. Oliver Foundation.

2003
Houston, Texas is named by national media as the "fattest city in America." That same year at the American Dietetic Association Meeting in San Antonio in 2003, 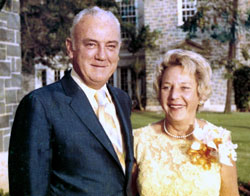 the Surgeon General of the United States predicted that this may be the first generation where some children may actually not out live their parents because of obesity and its associated co-morbid conditions.

February 2003
The foundation board of directors Dr. Tom Woehler, Mrs. Deborah Woehler and Mr. Marvin Wurzer sought to find a specific area of health to focus the foundations efforts. In light of the growing epidemic of childhood obesity, the board determined that the Oliver Foundation's focus would fall on addressing the issues of childhood obesity.

2003-2004
The board of directors decided to seek out partnerships with institutions and foundations to utilize and enhance existing avenues for approaching the problem of childhood obesity. The Oliver Foundation aligned with the nationally recognized, award winning program, Healthy Kids Challenge, to build concepts, models, and initiatives that support healthy change as their educational component. The Oliver Foundation kicked off the first Houston initiative in the Spring of 2004 with Neighborhood Centers Inc. The second program included Fort Bend Independent School District and Texas Children's Hospital. Today, through the the Oliver Foundation's groundbreaking efforts and innovative training, over 30,000 children are experiencing supportive environments and learning opportunities to build healthy habits and make healthy choices for life.

The Oliver Foundation is a Texas-based 501(c)(3) non-profit operating foundation dedicated to the prevention of childhood obesity.